StaMixCo manufacturers all three commercially proven static mixer designs used for high viscous melt flow mixing of polymers in extrusion service. As with most process equipment, each static mixer design has specific advantages and disadvantages that make it more or less suitable for a specific application and installation. Each type of motionless mixer is discussed below: 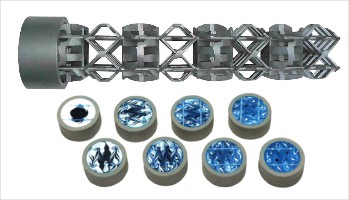 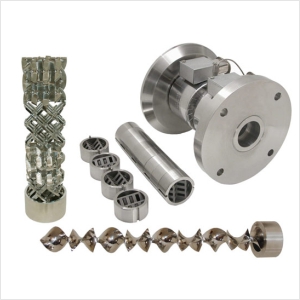 construction where the mixing elements are obtained via a single molten metal pour. They are made of heat treated high strength 17-4 PH stainless steel. 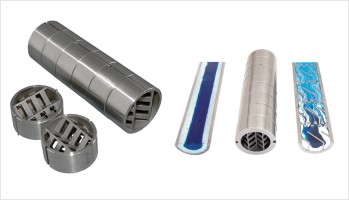 The SMB-R mixing elements are considered as high performance design where they create a very high degree of mixing in a short length.

The SMB-R mixing elements are virtually indestructible due to their monolithic cast construction where the mixing bars are jointed to each other and to the ring wall via a single molten metal pour. 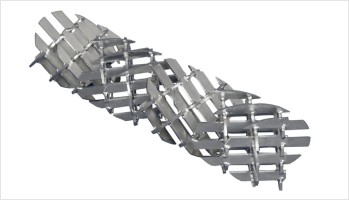 The SMB-GX motionless mixer is a design that has been used in melt flow mixing extrusion service for over 25 years.

The SMB-GX mixing elements are considered as high performance design where they create homogeneous mix in a short length. It has the same fundamental X-Grid crossing-bar structure as the StaMixCo SMB-R static mixer (Figure #8), but without the support ring around the mixing blade structure which gives the SMB-R its remarkable strength.

Since the SMB-GX is manufactured from metal plates that are welded together, virtually any custom static mixer plate thickness, material and diameter can be fabricated to meet process and installation requirements.

Even thickness across the entire extrusion width. 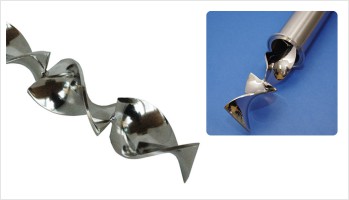 The SMB-H Helical static mixer design pioneered the static mixing industry and has been used as a viscous static mixer on extruder's for over 37 years.

The Helical design is considered a low mixing performance-long length-low pressure drop motionless mixer as compared to the later developments of high performance static mixers such as the SMB-R and SMB-GX which have become the technology standards in the industry.

StaMixCo manufactures SMB-H static mixers by advanced proprietary manufacturing technique where the entire unit is machined from a solid rod of bar stock material without welding.

This machining process allows for custom static mixer fabrication in virtually any L/D twist, in very small sizes, with very high strength, straight and true dimensioning and with a RMS 12 mirror polish surface finish which is a much improved surface finish as compared to the traditional 32 RMS finish for the twisted and welded design.